Death of a TyTN II 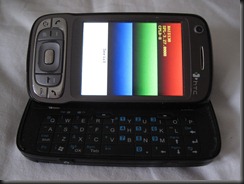 So I was away at the weekend and as usual, one of my pieces of tech decided to take the opportunity to check-out from this world. I’m sure it’s just my perception but it does seem that these things only occur when I’m not at home or in the office, where it wouldn’t really matter because I’d have the time and tools at hand to overcome any problems.

This time it was my trusty HTC TyTN II smart phone. I’ve had numerous smart phone incantations, admittedly mostly Microsoft based but that’s because I’m a .Net programmer and always liked the idea of being able to program my phone. I was lured into the arena by the promise of seamless integration of my desk and mobile freeing me from office shackles and dark rooms on sunny days. The reality however was usually more frustrating than liberating, particularly with the earlier incantations. However, the TyTN II was the phone that changed all that for me.

The Unit
Although somewhat (ok quite) bulky by today’s standards it houses a full QUERTY keyboard and more than that, the screen tilts up so its a bit like a mini laptop but tiny! Naturally being a phone it is fully connected and the on-board wireless enabled faster browsing when in range of a suitable signal.

Apps
It runs Windows Mobile 6, the last of a run of Windows mobile operating systems but one which unlike some (e.g. CE) actually worked. It comes with a mini Office and a smattering of other applications. Naturally being a Windows Mobile device you can download and install any application that will run on it, but with that lack of censorship comes pitfalls: quality isn’t there for some and of course others contain Trojans. However, for me the freedom to choose what I did and did not want to install far outweighed all that. As with any device, choose your publisher carefully (e.g. Google for the Maps app) and you should be ok and anyway iPhones didn’t exist then! The memory card offers the ability to install all this extra stuff without eating up the phone’s meagre memory.

Synchronisation
You plug the phone in by mini USB and it just works! Not like the Nokia experience (I also have a 6700) with their dreadful Ovi suite (does this stand for Orful Visual Interface?!) which hogs your computer’s resources whilst not actually syncing anything. The Mobile Device Centre pops up and allows you to choose what you do and don’t want. I particularly like the ability to sync RSS feeds so you can catch up with headlines whilst on the move, even without coverage. That and a special directory of documents to share with the phone, so you could start typing up a report offline whilst on the train or something, plug it in and then carry on with the same document on your desktop. Sure it wasn’t always so easy and sometimes it forgot what it was supposed to be syncing but all in all it works pretty well.

The Phone
Even with all these lovely desktop like capabilities the phone still worked! OK you couldn’t have too many apps running at once and expect it to work seamlessly and lately some recipients have complained of a squawk when answering my call but it still managed to receive calls even if I was in the middle of using a pretty heavy app. And with Skype installed you could make calls via wireless… although to be honest I found this to be pretty unusable, its still nice to have in an emergency e.g. when networks jammed!

The Camera
Hardly worth mentioning as it is so poor, soon misting over with a sort of muslin type effect. However, having front and back facing cameras is a nice feature, and the lens could always be cleaned of course!

The Final Moments
I’d left the phone off but on charge overnight as usual, so as not to be disturbed by well meaning but unnecessary alerts e.g. of birthdays which I appreciate DO start at midnight, but I don’t always want to know about them then! Anyway I was woken by it vibrating periodically, not unusual if it was on, but less so if it was actually off, plus there was something a little more urgent about this vibration. It was like it was trying to tell me something. It was really hot and the screen was stuck on the Orange ‘flash screen’ that usually only showed briefly when it started up. I pulled the battery out and didn’t think about it until the next day. However, when I went to use it the battery was pretty flat, which it shouldn’t have been given the amount of charging it had before the incident. Ever since then it has refused to charge. So sometimes it’ll turn on but only shows a screen of various bands of colour with some information, or other times when it’s been off a while it’ll boot up but it won’t be long until it starts letting out plaintive “my battery is flat” bleeps. This is probably as simple as a connection or something but I have fiddled a bit and I really need something that is reliable as I often take it away instead of a laptop.

Conclusion
I have had and used the phone for over three years. That says it all really. I’m pretty picky when it comes to tech, particularly something as personal as a phone but it really did make a useful companion. I have no idea how many tasks it helped me remember (or rather forget, until Monday morning!), or how much time I’ve saved by being able to effectively work on the move. It had a good run, far outliving any other phone I’ve ever had but now I’m ready to move on. I wouldn’t want to get another, as it is already pretty outdated so now the question remains: Wait for the new Windows Mobile or get an Android or iPhone?

Update… mmm it seems my contract with my phone provider doesn’t end for a while so I’m probably going to have to put up with the Nokia which I love as a phone but is not so useful as other things, like writing documents or mapping (ok it does have maps but not linked search venue reviews etc like Google Maps) and my beloved keyboard. Time to get the screwdrivers out perhaps… or buy another TyTN II on Amazon