Windows 7 Brings Old Laptop Back From The Dead

How I installed Windows 7 on an old laptop. These instructions use a specific machine as a case study but are just as applicable to any PC and any operating system.

My dad has an ultra portable Dell Latitude X1. In laptop terms it’s small (about 25x20cm) and very light. He bought it when Windows XP was the latest and greatest and so of course has been running with that ever since. It has been sluggish for a while but more recently became unusable. Despite it’s advanced age he was keen to continue using it as it meets his needs for email, web and word processing very well in a small package. Despite everyone’s love affair with XP I have harboured a deep hatred of it since about three months after it came out. The honeymoon was over after my fights trying to get it to do the simplest of things, like connect to a network! You might say that my eXPerience was a poor one indeed (the name is from the ‘xp’ in experience!). Please no flaming on the subject: it’s my opinion and I’m entitled to it!

It used to be that installing the latest operating system from Microsoft on an old machine would be unthinkable as they used to release severely bloated behemoths, each one requiring the latest top spec machines even to run itself, let alone any programs. Thankfully this seems  to have changed after their less than perfect Vista release. I’ve often thought that Steve Jobs must love that operating system, as it seemed to drive so many people over to Macs! I hope that Windows 7 heralds a new age for Microsoft operating systems, forever.

When installing a new operating system the biggest concern is to be sure that you have all the old files you created. I couldn’t be sure of his backup regime so I decided to copy the entire hard drive. On larger systems you could decide to copy only the user files directory, but do check as some software still stores user specific information elsewhere on the drive. This also provides a fall back position if the install fails. I DO NOT recommend an ‘in place upgrade’. You are installing a new OS to improve the speed, reliability and security of your system. It’s a time consuming task but copying the files and formatting the drive does not add much to that. With that in mind why on earth would you want your old setup lurking in the recesses of your hard drive taking up space? My methodology was as follows:

If the advisory tool says that you can’t install it don’t lose heart: it gave me a bad report for this old machine but as it was unusable in its present state and I wasn’t prepared to install XP on it so I carried on anyway and it works just fine! That’s another reason why copying the entire hard drive is so crucial: at least if the install fails you have the fall back position of being able to re-install your old OS or another one like Ubuntu which, with Open Office is now pretty good competition for a fully fledged (useable and useful) operating system.

I wanted to be sure that I saved any work on the laptop so I wanted to do a copy of the entire drive. You can’t do this if you have booted from the drive as some files will be in use, so you need to either remove the drive or boot from another drive on the same machine. Happily this machine only had a 60GB drive so my idea was to boot up the machine from a different drive then copy the entire drive to an external USB hard drive. I have a 70GB drive from an older laptop and with an inexpensive 2.5” disk caddy this makes a handy USB drive. You could do the same with a ‘normal’ hard disk buy getting a larger caddy.

I used an inexpensive USB stick to create a bootable USB drive using Ubuntu (instructions on how to do this here). A bootable USB stick is a useful tool to have anyway: with that to hand if your machine refuses to boot one morning, at least you’ll be able to get online and access your files without getting down and dirty with a screwdriver.

In order to boot from USB you need to change some settings in BIOS. If you’re reading this you probably know what BIOS is but suffice to say it’s just the software that first loads on your computer and allows your operating system to load up. For a more in depth description view the Wikipedia Entry. You don’t have to use Ubuntu or a USB stick and it’s even possible to boot from the Windows 7 install disk to a command prompt (where you could use xcopy) but I personally prefer the Ubuntu route. 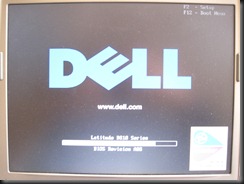 Press F2 to enter BIOS
or F12 for Boot Menu 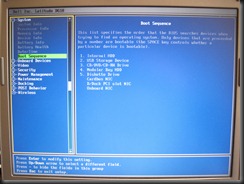 Enable boot from USBTo enter the BIOS settings you usually have to press a key whilst the computer is starting up, just a few seconds after it has started but before the operating system starts to load. On Dell machines this is usually F2. When it loads it will usually be a very basic text interface with a list of sections down the left and settings on the right, often with a blue background. All BIOSs are different but somewhere will be a section referring to ‘Boot Sequence’ (sometimes under POST settings). This will typically be in the order: disk drive, CD drive, HDD (hard disk drive). Personally I prefer to have HDD at the top of the list as I boot using that most of all and if I want to boot from anything else I can always select it from a boot menu. If USB is an option then enable it here attach the USB stick and reboot.

You will probably have to enter a ‘Boot Menu’ in order to get it to actually boot from the USB, on Dells this is often activated by pressing F12 a few seconds after restarting. It will present you with a choice of disk drive, CD, etc… On some systems booting from USB won’t be possible in the BIOS so you’ll have to boot from a CD or DVD or remove the drive and attach it to another system (e.g. by putting it in a caddy).

Once the backup was created it was time to install Windows 7. I did this from an external DVD drive (as the machine does not have an internal  drive). I would recommend during this process that you connect up to your LAN via a cable. The wireless won’t work until it’s driver is installed and the connection is configured anyway whilst a cabled connection will likely work as is. This will allow the install process and newly installed OS to get the latest drivers and updates itself and with Windows 7 should mean you don’t have any major stumbling blocks. I do not miss the bad old days of stumbling around looking for drivers for your specific CD ROM drive. However, you may have issues with old peripheral hardware such as sound cards. For me the improved performance and reliability of Windows 7 over XP far outweighs the need to listen to music on my PC and with a little searching on your manufacturers website or the internet you may be able to fix this anyway.

The remainder of the steps should be self-explanatory and anyway differ according to a user’s  specific needs, but a list I use is: