Airport Extreme: How to Disable DHCP while Maintaining NAT

If you run a DHCP server on your network already you might want to use the NAT capability of an Airport Extreme without using the DHCP server functionality. With a bit of fiddling this is possible.

I found the answer thanks to this post:
kair: How to Disable DHCP while Maintaining NA: Apple Support Communities

To guard against link rot the process is essentially:


From the link and using a Windows 2008 as a DNS server the bit I struggled with was "Be sure to specify the Airport Extreme (e.g. 172.16.1.1) as the default gateway or default router". In Windows Server 2008 this is under Server Manager, Roles, DHCP Server, [server name], Scope, Scope Options, right click, Configure Options. The option was greyed out for me until I de-authorised and re-authorised the Scope for some reason (and a customary reboot of course!). 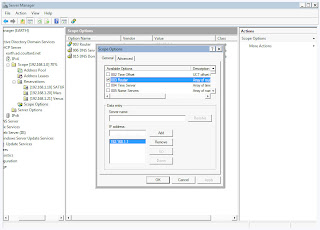