Complain (Constructively) and Ye Shall Receive!

The story of one developer’s discussion with Microsoft about the Action Pack subscription changes and it's happy ending. 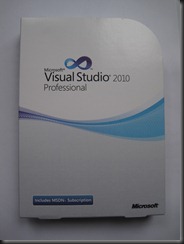 My shiny new VS 2010
Thank you Microsoft!

I’ve been an Action Pack subscriber for many years. If you don’t know about it, it’s a great way to legally enjoy a large suite of software produced by Microsoft. As a C# developer predominantly of web based solutions a great deal of my interest is with Visual Studio which used to be included in an add-on to the standard package.

Earlier this year they decided to shuffle the suite about and moved VS and Expression Suite into another package called “Action Pack Development and Design”. I wasn’t aware of this change, I guess their emails go into my SPAM folder, and I didn’t notice as I had tried out VS 2010 Express and liked it but had no need for the might of the full software. Then one day a project came along that required the full package, I dutifully went to the Partner’s website to download my copy as a fully paid up subscriber who’s subscription ends in April next year, some six months away. I navigated the Partner’s website (which I loath for it’s bad organisation, page errors and slow loads amongst other things) and when it wasn’t on the list of downloads I thought “mmm that’s odd”. I did some searching and discovered that in fact they had moved it to a new package. “No problem”, I thought “I’ll phone up and switch my subscription to the new one which is clearly designed for developers like me”, all the time thinking: “aren’t Microsoft great for recognising the need and importance of developers so they’ve even designed a subscription just for us”. Oh how wrong I was!

When I got through to the European call centre which is in Germany, a very polite and efficient man helpfully informed me that yes I could terminate my current subscription and start a new subscription BUT if I did that there would be no refund for the current subscription. “WHAT?!”, I said “I can change subscriptions but have to forfeit half a year’s subscription fees? That’s madness”. The options he gave me were:

To answer those options in order:

To put it another way if I’d subscribed to a newspaper delivery for a year but half way through wanted to change the newspaper the agent delivered I’d expect to be able to. Wouldn’t you? I could understand the fee being non-refundable if I was wanting to cancel my subscription but I wasn’t!

My Action Pack subscription runs from March and they changed it in May, so I don’t understand how they expected that to work: I would have either had to go for two months without one (presumably re-installing all my AP software with open source alternatives to avoid running it without a valid license); or pay for the whole year fully knowing that I’d be forfeiting TEN months of fees!! Apparently there was an offer available but it was only for 15% off the new package, which would not equate to the fees lost. Anyway I expressed this sense of wrong-doing to the man and after repeating the options a few times (he has to stick to the company line after all) I said I wasn’t happy at all and wanted to complain. At the time I thought this would be pointless, I even said to him “I’m sure I might as well write my complaint on a piece of paper, tear it up and throw it in the sea” but I was left with no other option. No way was I going to give up half a year’s subscription, on principal if nothing else. How did this fit with MS CEO Steve Ballmer's “Developers” Mantra?

I dutifully phoned the number I’ve been given and a helpful lady gave me an email address to write my complaint to. Despite feeling I was wasting my time I spent some time outlining my discontent in a detailed and constructive fashion and sent it off, making sure to make a note to re-contact her if she didn’t reply by a week later.

My first surprise was that I received a reply inside a few days from a very helpful man who had picked up my case. It wasn’t what I wanted to hear as it re-stated the options that the original support guy had given me and also that VS was never part of the original package. Needless to say I have disks of VS from my subscription going back before the 2005 version with “Action Pack” written clearly on the label so I scanned a couple of the 2008 ones and sent them to him. After a few days he came back and admitted his mistake (a refreshing change), re-stated that I can’t change subscriptions BUT that he didn’t want me to go without so was prepared to offer me a copy of VS 2010 Pro to use until my subscription comes up for renewal next year. Well you could have knocked me down with a feather!

I am not that reliant on the other parts of the package being so up-to-date, I find you can usually muddle through until the latest version is available with operating systems, MS SQL Server, Office etc but with Visual Studio you’re kind of stuck without the latest software. There are alternatives to VS of course but I’m not keen as that way a lot of tweaking lies. More drastically you can just change platforms. I’ve done it before: like many developers I’m somewhat ambivalent about platform, I’m just keen to develop on what’s best at the time, I’m not just a slave to one direction. Having said that at the moment the C# .Net platform is a clear winner in my book for most of what I want to do.

So many thanks to ‘A’ in the complaints department and kudos to Microsoft for responding positively to complaints and for recognising the need to support developers, even inconsequential ones like me, but come on Microsoft, think about what effect you’re going to have to those of us who are actually trying to legally use your software before you go swapping things about and making it impossible or financially implausible for users to switch.