Rebirth of a TyTN II aka Kaiser

Installing Android on an HTC TyTN II aka Kaiser

In a previous post (Death of a TyTN II) I lamented the loss of my HTC TyTN II smart-phone. After it’s demise I resolved to get either an Android or iPhone (or Windows Mobile 7 if I could wait that long). However, after a brief discussion with my phone carrier (Orange) it transpired that because I had recently changed my contract subscription I was not eligible for an update to my phone until April 2011, some seven months wait. I’m a patient man but really this is pushing the boundaries. An alternative was to ‘buy out’ of my existing contract but that was prohibitively expensive. 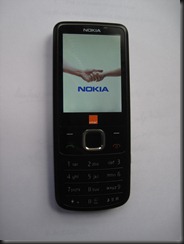 Nokia 6700: Neat and reliable
but oh so limiting


Since the TyTN’s demise I have been using a Nokia 6700. To be honest I really like just having a phone that is reliable, has a long battery life and thin enough to fit in my pocket without bulging, especially when wearing shorts! However, after the honeymoon period was over (about a month) I started to miss the many things about my smart-phone that I used to enjoy, such as: being able to type lengthy emails without the frustration of finger strain of entering text via a number keypad; seamless syncing (the Nokia Ovi software is surely one of the worst pieces of software ever written?!); and the ability to read and create MS Office documents on the move.

The TyTN is no longer covered by insurance or warrantee but I thought “you’re no electronics genius but you must be able to work out what is wrong with it”. So I searched online for a technical manual for it and got out my screwdrivers. After a bit more searching I found a few users with similar problems. I had already thought that it was related to power so I began by looking into the USB socket on the device. After a brief panic that it might be the fuse between this and the main board (rendering the whole useless), I started to look in more detail at the socket itself. Using a torch and a magnifying glass I peered in and noticed that one of the pins appeared to have been bent to the back of the socket. I tried to bend it back into place with a pin but almost immediately it broke away. Clearly the phone will never charge from this socket ever again. However, other people have managed to replace it with success. I began to attempt to take off the old one but I’m not a good solderer so I abandoned that plan before I wrote it off completely. So for the time being I’ve resigned to use an old TyTN with a broken screen as a battery charger and just switch batteries whilst syncing via blue-tooth. This isn’t great but at least it works. I may yet attempt to replce the socket but I’m wary of breaking both devices!

In the midst of all this searching for details on the TyTN I discovered much discussion about installing Android on them. So I decided to try this for myself. I wanted to keep the old Windows OS as there were various posts saying that Android on a TyTN wasn’t a production ready so I went for SD card Installation which seemed to be a breeze. Note this does not run inside Windows but rather re-boots into Android. I decided to use a TreeSize (link below) file to clear out my phone’s memory first:

Next time you want to run it load up Haret via File Explorer and click ‘Run’. If you manage it you’ll see all sorts of weird display issues (the screen isn’t really big enough) and not everything works (e.g. camera doesn’t on mine) but the phone and sms messages worked as did WiFi and email. I’m just keen to be able to try out Android apps on a real device and now I can. 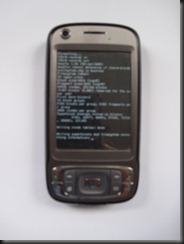 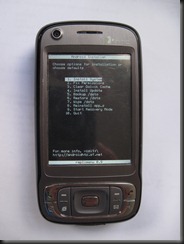 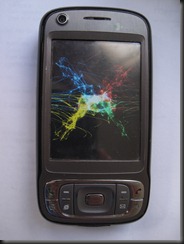 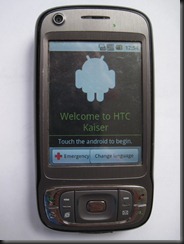