SamMobile are reporting that updates should be available for Samsung Tabs in July or August 2012. So now all I have to do is persuade Kies to connect to mine!

I have a Smasung Galaxy S2 phone which the solution I've written about before worked for but I also have a Samsung Galaxy Tab 10.1 running Android 3.2. It would connect via Kies wireless sometimes but nothing I tried would get it to connect via wired: it just said 'connecting' and never connects (I've left it for hours like that), or responds with 'Device not responding'. On a Windows 7 machine or a Mac with 10.5 and later OS. I can carry out file transfers and backups but not firmware updates via wireless connection.

I had read online about others with the same issue after a certain firmware update so I got stuff off it using MTP via the Windows machine and then did a factory reset (Settings, Privacy, Factory data reset). This took it back to a different Kernel Version (v2.6.36.3 dated 7th Dec 2011). Once I had done that it would connect to Kies on Windows, but still refuses to on a Mac. To overcome this I installed VMware and a virtual Windows machine on my Mac (more about that here), then, using the inbuilt VMware USB connection settings I connected the tab to the VM.


Once I finally got it to connect to Kies but it then said it had the latest firmware... enough to make me want to smash the tablet! 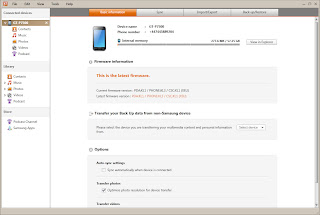 Email ThisBlogThis!Share to TwitterShare to FacebookShare to Pinterest
Labels: 10.1, Samsung