Ever since Samsung announced they were rolling out Android 4.0 (Dec 2011 and March 2012) aka Ice Cream Sandwich I have been waiting impatiently for Orange to release it to my Samsung Galaxy SII. I guess they had to re-craft their horrid Orange customisations before allowing us mere mortals to upgrade. Whilst it is possible to "root" the phone I don't wish to as it would invalidate my warrantee. That day finally arrived on Friday thanks to an announcement on their twitter feed.

Sadly despite the phone having an in-built wireless upgrade feature they are releasing it via the Kies interface, which is as I have previously written about, some of the worst software ever written.  If you actually manage to get your phone to connect to your computer via it then you are lucky. I have written before about some techniques that might help. Even on my trusty Mac where I have found it behaves better than the PC, Kies managed to grab and maintain focus throughout the process meaning I could activate other windows but it would feverishly snatch back focus instantly so for example whilst I could click on links in a browser window I couldn't actually type anything.

The Process
Load up Kies and plug in the phone. If it doesn't connect try some of my previously mentioned techniques.
The update took about 20 minutes on my Mac during which time there were two progress windows like below, one after the other: 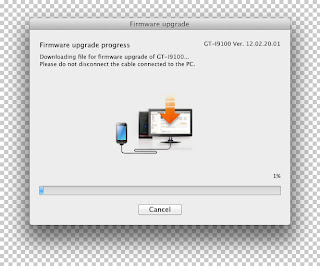 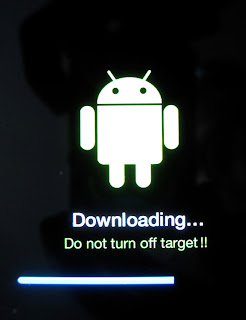 Then the phone re-boots into Safe Mode and goes through installing the applications: 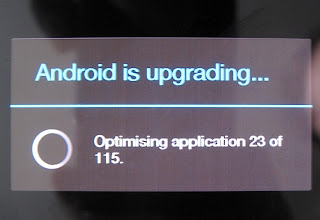 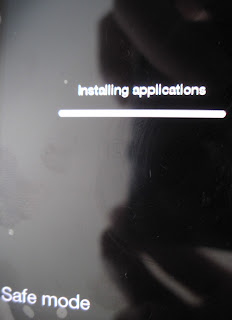 Mine seemed to go through several re-boots after that, staying in Safe Mode. So many in fact that I was beginning to wonder if I had done the right thing, but eventually it settled down and re booted into normal mode. The applications are all re-installed and it works well.

What's Different?
There are many detailed comparisons on the web and this post is about upgrading not the changes but in general the look and feel is much more "clipped" to my eyes: less shading, more defined lines. I upgraded for two main reasons: development and Chrome Beta on Android. Chrome beta synchronises with the desktop version: I'm bored of looking at something on my phone, returning to my desk and having to email the url to continue reading or visa versa. For the official line on the changes go to android.com:
http://www.android.com/about/ice-cream-sandwich/


UPDATE: one of my favourite features in the new version is the in built data monitoring with which you can restrict your phones mobile data usage to stay within your data plan, especially necessary when abroad.