I have lived with the well known audio out problem for a long time now where the audio out from my Macbook Pro was stuck on optical when nothing was plugged into the headphone jack. It seems there is a switch in the port which tells the computer when anything is plugged in and this was stuck 'in'. The internal speakers still worked on boot (giving the much hated ding) so I knew they were fine, and sound was also fine if I plugged in headphones.

I took it to the Apple Genius Bar and they confirmed it was a known problem, the fix would be £300 as I was out of warrantee.  I was not prepared to pay that much for it but it is annoying eg:

I recently did a fresh re-install of Mavericks with a new hard drive and wanted it all to be working again so I spent some time researching and looking into the port. I'm not normally shy of fiddling internally having replaced memory, hard disks and keyboards on laptops before now but removing the motherboard from a macbook pro which other than this niggly problem is in good working order was a step too far.

UPDATE: in the end it keeps happening so I bought a USB to headphone jack adapter: Logitech USB To 3.5mm Jack Audio Adapter

Pre-checks:
Solutions that did not work for me:

What did work was getting a small powerful torch and some back electrical tape with a hole in it to mask around the jack hole to avoid reflection from the macbook body. Using this I was able to see inside the port. Viewing it with the macbook on it's side looking down the hole there are two copper contacts at the top of the hole (12 o'clock, up by the keyboard), one at the front and one at the very back. These are square. Then there are three further contacts at 3 o'clock, 6 o'clock and 9 o'clock. I used a watchmakers screwdriver to VERY gently and carefully push each of these contacts in turn, figuring whichever was stuck in would not give. It seemed to me the back square one at the top of the whole was the culprit, so I spent some time gentle pushing different parts of it (my screwdriver was TINY) until eventually I felt it was reacting differently.

Finally, the internal speakers returned to the list of devices for sound output: 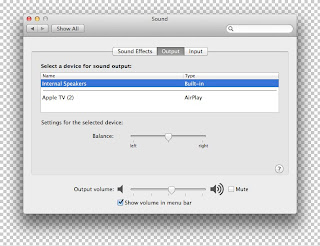 Of course this fix may need to be repeated when I next plug a headphone jack in but at least I know how to fix it.

UPDATE: This has happened again since originally writing this post and this time the screwdriver seemed not to have an effect but playing music through headphones with the system preferences sound pane open whilst gently and slowly pulling the headphone jack out made the internal speakers work again.
Posted by PFogg at 3:03 PM